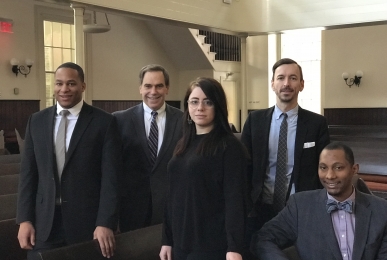 Almost no one without a criminal record knows about criminal records or the enormous, inter-generational harm they inflict on people, their families, and their neighborhoods. For over 200,000 low-income Philadelphians, criminal records are being used mistakenly to deprive them of jobs, housing, credit, and other opportunities for which they are qualified. Philadelphia Lawyers for Social Equity (PLSE) files more expungement petitions than any other organization in the country. The Philadelphia Bar Foundation’s grant makes PLSE visible to the legal community and confirms PLSE has achieved a level of excellence that merits serious consideration by the law firms and lawyers in this city.

It is estimated that over 25% of Philadelphians have criminal records. Freely accessible to the public over the internet but written with words few non-lawyers understand, criminal records containing non-conviction and low level conviction histories are frequently, and often illegally, used to deny people jobs, professional licenses, housing, government benefits, and other crucial opportunities for which they would otherwise qualify, cutting them off from the better lives they could achieve for themselves and their families. A criminal record can be “expunged” (erased as if it never happened) or “sealed” (hidden from public view but still available to state police and prosecutors) only by judicial order. PLSE files and prosecutes more petitions – over 2,000 per year – than any other organization in the country, with a success rate exceeding 98%.

With few exceptions, the only way to remove actual convictions from a criminal record is by a Governor’s pardon. This requires the completion of a rigorous, daunting, and (especially for low-income applicants) expensive process that takes over three years to complete, and often ends in denial. PLSE is working closely with the Lieutenant Governor and the Secretary of the Board of Pardons, among others, to create a statewide “Pathways to Pardons” that will simplify and accelerate the process and lead to higher success rates for those clearly deserving forgiveness. In 2018, PLSE will begin establishing community-based “pardon hubs” and developing an open-source computer application that will assist individuals in the preparation of pardon applications.

Each year, PLSE informs over 1,100 Pennsylvanians of their rights regarding criminal history records, and leads or participates in approximately 80 presentations to employers, community groups, professional associations, clergy, business leaders, elected officials and lawyers, including CLE programs. This builds public awareness and consensus as to how the social and financial punishments inflicted by criminal records too often far exceed those imposed by actual judicial sentences, and how such indirect punishment runs counter to the best interests of communities by needlessly limiting the productive lives and talents of its citizens and their families.

PLSE provides free legal services and representation only in Philadelphia County, and only to clients whose annual income is not more than 125% of the federal poverty guideline or who otherwise have been qualified by the Philadelphia Court of Common Pleas as being eligible for proceeding in forma pauperis.